How is Dayton Water prepared for emergencies?

Each Dayton water treatment facility has Emergency Response Plans. These plans address all types of emergencies. We update those plans annually – that’s an Ohio EPA requirement. We go beyond requirements. Every year, we conduct emergency exercises for natural disasters and other catastrophes. These exercises include our community partners, such as Public Health, Ohio EPA, businesses, universities, Public Works, Police, and Fire.

We use case studies of actual events from other water utilities.  This tests the capabilities of our water system. We evaluate our response under similar conditions. We also test the systems with simulations of manmade disasters, natural disasters, cyber-terrorism, and more.

By simulating emergencies, in detail, we prepare for the real thing. The lessons learned from all these exercises are used to improve operations.

Redundancy refers to duplicate systems. These lessen service interruptions.  Since 1954 the City has had only two water system wide service disruptions that included system-wide boil advisories.  This stellar record can be credited to the redundancy of our water treatment plants, pump stations, well fields, and electric feeds.  Additionally, in the case of a major main break, the robust distribution system allows routing water to areas where it is needed.

The City of Dayton has built-in redundancy in its water system. We have two separate water treatment plants. Each treatment plant has an independent pump station that can support the entire system’s demand. And each plant can treat enough water to meet the region’s current need.

Our two independently operated well fields can each produce enough water for every customer. The City has over 100 production wells. Less than half are used at any time. And the City has an undeveloped well field for additional future redundancy.

Here’s a diagram that shows the redundancy of our water system:

Dayton also has redundant electrical feeds, both a primary and secondary feed, to each treatment plant, pump station, and well field. We also have mobile backup generators. The mobile generators can be sent to strategic locations during an emergency.

The City pursued grant funding to provide sufficient additional permanent generators to maintain a minimal level of service in the event of total loss of power from the utility company.  Minimal level of service means that pressures would be maintained so that no boil advisories would be required, and that water would be available from hydrants for fire protection.  The City was awarded a grant of $3.6 million for the purchase of generators.   Five generators will be installed at our water treatment plants and pump stations to maintain a minimal level of service.  The total cost is expected to be $4.5 million and the City will pay the difference between the grant and the total cost. 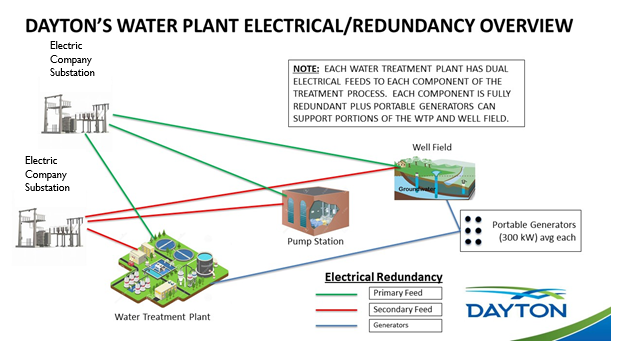 The first system wide boil advisory since 1954 was in February 2019.  It was due to a 36” water main break.  This led to the Miami Water Treatment Plant losing pressure.  The 36” water main runs in an embankment parallel to the Great Miami River.  The river was near flood stage when the water main broke.  The location of the main break was under water.  The Ottawa Water Treatment Plant provided redundancy and was able to provide enough pressure that the water bubbled up to the surface of the river.

Once the location of the break was identified, crews were able to quickly isolate the break and restore the system to normal operations.  Once the Great Miami River flood stage retreated, a diver was able to determine that the embankment supporting the 36" water main had washed away.  This undermined the water main causing sections of the 36” water main to become disconnected.  Work on a nearby bridge caused the issue.